It has been a long and eventful process from the conception of the idea about a Hamsun Centre in the mid 1980s until the completion of the building on August 4, 2009 – the 150th anniversary of the birth of Knut Hamsun.

The idea about an international museum or centre for Knut Hamsun arose from the environment around the Hamsun Days festival in Hamarøy in 1986. In 1994 the Nordland County Council and Hamarøy Municipal Council set up a limited liability company to lead the work. Later that same year the American architect Steven Holl was engaged to design the Hamsun Centre.

Holl spent considerable time gaining an insight into Knut Hamsun’s life and works and immersing himself in Hamsun’s literature. The novels Hunger, Mysteries, Pan and Victoria and Hamsun’s contrasting literary characters that were of particular importance to Holl. He travelled to Hamarøy and started to draw. When he presented his characteristic watercolour sketches for the first time in 1996, they showed a strange tower, a building that was an interpretation of Hamsun’s literature and which the architect himself described as a Hamsun character.

“Building as a Body: Battleground of Invisible Forces... The building is conceived as an archetypal and intensified compression of spirit in space and light, concretizing a Hamsun character in architectonic terms. Peculiar and phenomenal experiences in space perspective and light create an inspirational frame for the exhibition.”

The building’s design generated considerable attention and debate in Hamarøy, Nordland, Norway and abroad. In 1996, MoMA in New York purchased the model of the building and in 1997 Holl received an award at the Progressive Architecture Awards in USA. In 1997, the decision was made to locate the centre in Presteid and the auditorium was added. In 2000, the Nordland county parliament decided the Nordland County Council would act as owner of the Hamsun Centre. The centre was jointly financed by the Nordland County Council, Hamarøy Municipal Council, the state and a host of private sponsors and collaboration partners. The final state allocations were received in 2007 and in 2008 the foundation stone was finally laid. Steven Holl was the guest of honour and there were major festivities in Hamarøy. In 2009, Salten Museum took over operational responsibility of the Hamsun Centre.

The building was completed in 2009 and formally opened by the Crown Princess Mette-Marit at a major opening ceremony, which was the highlight of the 150th anniversary of the birth of Knut Hamsun on August 4. The Hamsun Centre opened to the public on June 13, 2010. 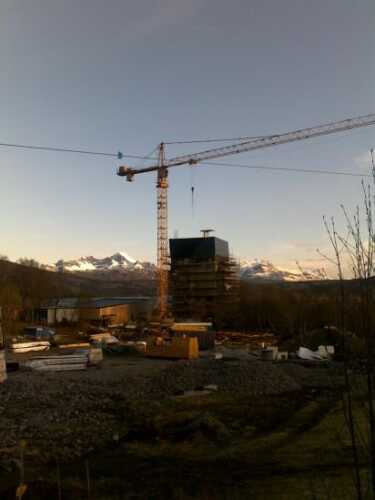