«These last few days I have thought and thought of the Nordland summer’s endless day. I sit here and think of it, and of a hut I lived in, and the forest behind the hut, and I’m writing this to help pass the time, and to amuse myself.»

In Pan (1894) the young Lieutenant Thomas Glahn relates the story of what happened to him at Sirilund, a trading post in Nordland.

It is 1855, and Glahn survives on what he is able to hunt and fish. He lives a simple, isolated life in his cabin, in apparent harmony with nature. Yet he cultivates relationships with the village’s most prominent local people, and starts an affair with Edvarda Mack, daughter of the local squire, the trader Mack.

An epilogue to the novel describes how Thomas Glahn died while hunting in India. Glahn’s account is full of poetic and mystical descriptions of nature and mood.

The novel was hailed for the beauty of its descriptions of nature by contemporaries. Among scholars of modern times, however, the more common response is to criticise Thomas Glahn’s narrative voice and the poetic nature of his depiction of life.

«It was beginning to be no night; the sun barely dipped his face into the sea and then came up again, red, refreshed, as if he had been down to drink. (Pan)» 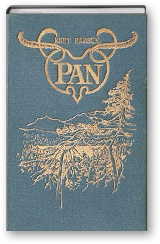